The post titled Power Gating demonstrated the implementation of a Power Gating Cell and how it helps in minimizing the leakage power consumption of an SoC. Make sure you go through it once more. The basic rationale is to cut the direct path from the battery (VDD) to ground (GND). Though efficient in saving the leakage power, the implementation discussed suffers from one major drawback! It does not retain the state! That means, once power of the SoC is restored, the output of the power gated cell goes to 'X'. You can't really be sure whether it is logic 1 or a logic 0. Do care? Yes! Because if this X propagates into the design, the entire device can go into a metastable state! In order to prevent such a disastrous situation: the system software can simply reset the SoC. That would boot-up from scratch and make sure that all the devices are initialized.

This means, every time I decide to power gate a portion of my SoC, I'll have to reset that power gated portion once power is returned. This imposes a serious limitation to the application of the Power Gate discussed in the last post. How about designing one power gate which retains the state? But convince yourself that in order to do so, you'd need to spend, though small, some leakage power. Let's call this structure: State Retention Pseudo Power Gate. The term "pseudo" signifies that it would consume a little leakage power contrary to the previous structure which doesn't. But at the same time, you no longer need to reset the power gated portion of the SoC, because the standard cells retain their previous data!! Enough said! Let's discuss the implementation. 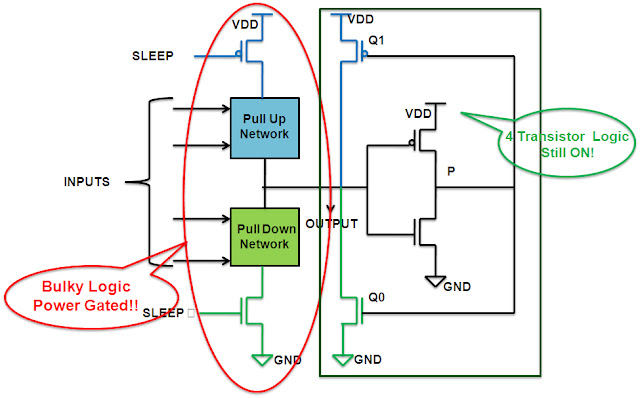 The above circuit has two parts.
Operation: Let's say before going into the SLEEP mode, the device had the output as logic 1. After entering the SLEEP mode (power off), the sleep transistors come into action and cut the power and ground rails of the device and hence save the leakage power. But the logic on the right (in green rectangle) is still ON! The output of the inverter would now become OUTPUT', i.e., logic 0. This would in turn enable the PMOS transistor Q1 and output would be restored back to logic 1.
Same is true when the output would be logic 0 before power gating. In that case the NMOS transistor Q0 would come into action to help the output node retain it's data.

Note that: All this while, when the device is in sleep mode, the output node would continue to leak. By adding the additional circuitry, as demonstrated, we are basically trying to create a feedback loop, which again helps in retaining the state. The hit, of course, is the leakage power of 4 transistors. However, the standard cell logic (in red oval) is usually bulky. Even a simple 2-input NAND gate has 4 transistors itself. And higher order input would have more! Same technique can be applied to any sequential device like a Flip Flop, latch or even a clock gating integrated cell.
Posted by Unknown at 6:24 AM